Insights for candidates and employers on all things work.

Stay ahead of the competition:

Google 'top leadership skills' and the list of skills that appear are endless. Looking through them you feel that they cover every possible skill you could possess – from time management to organization, ambition, honesty, creativity, confidence and a positive attitude.

However, there is one skill that outshines the rest: Emotional Intelligence.

It's the defining factor been between a good business leader and a great one. Not only that, but research has found that 'invisible skills' can account for up to 85% of a person's financial success. Skills such as a person's ability to empathize, communicate, negotiate and lead, all contribute to the invisible skills of Emotional Intelligence.

Emotional Intelligence encompasses 3 skills: emotional awareness, the ability to manage emotions (including their own) and their capabilities to utilize emotions and apply them to tasks.

However, it does NOT include the abiltiy to manipulate others emotions or putting on a front for others.

Why is having a leader with Emotional Intelligence important?

1. Having higher Emotional Intelligence is strongly correlated with better leadership

2. Those who have higher Emotional Intelligence are able to put together stronger teams. Not only that, but they are able to lead teams more effectively and efficiently, producing better results.

3. Leaders (and staff) high in Emotional Intelligence give your business competitive advantage. How? People higher in emotional intelligence are able to form relationships and build trust with clients or customers. People like to buy and do business with people they trust. Don't you?

So, how do you hire emotionally intelligent people?

There are 4 key indicators that a person possesses Emotional Intelligence:

When a person has a strong understanding of their strengths, weaknesses, what drives them, as well as their own emotions, it's a good sign they are self-aware. When people are self-aware, they are conscious of how their words and actions impact the people around them.

An indication of someone who has high levels of self-awareness are those who are willing to talk about themselves, in an unjaded, non-defensive manner.

An example interview question would be to ask them to recall a time that they acted on their emotions, and later regretted it. A person with high levels of self-awareness are open and give frank answers, self-depreciating humor is a good indicator too. However, red flags should be raised if a person stalls, tries to avoid answering or appears frustrated and irritated by the question.

Emotions are a driving force behind everyone, but those with high levels of Emotional Intelligence are able to self-regulate, and not act on an emotional whim.

These people are able to acknowledge when they are in 'an emotional' state, so they wait for it to pass and then respond from a place of reason. People who are good at self-reflection are also thoughtful, reflective, and comfortable with ambiguity.

Empathy can be seen when people are aware of how others feel, and are able to take this into account when choosing their words and actions. Don't mistake this for being unwilling to make tough decisions in fear of not pleasing everyone, it instead represents their ability to take into consideration their impact on others. They are also able to openly share their own worries and concerns as well acknowledge others'.

Don’t mistake social skills with only refering to friendliness. People who possess strong social skills are able to keep a team focused and moving towards an agenda, while constantly maintaining touch with the emotional climate of the group. Not only that, but they excel at networking, making connections and bringing people together.

Though hiring for technical abilities for a job is always paramount, there is often a time when you have to make a decision between potential employees who can technically perform equally. In times like these it is beneficial to have another measure, like Emotional Intelligence to help make the decision.

Want to learn expert tips on how to create a professional hiring process? Download your free copy of our guide, 'Hiring Done Right' below. 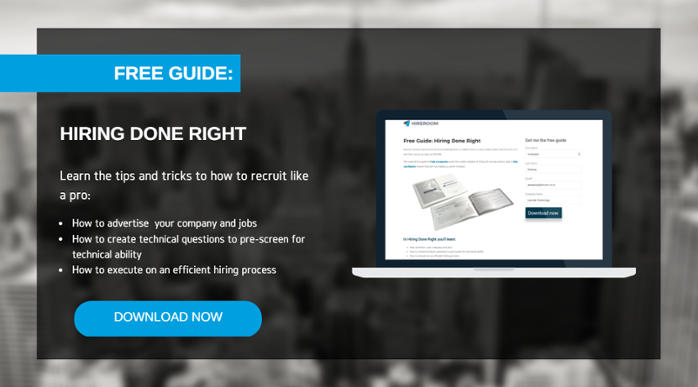